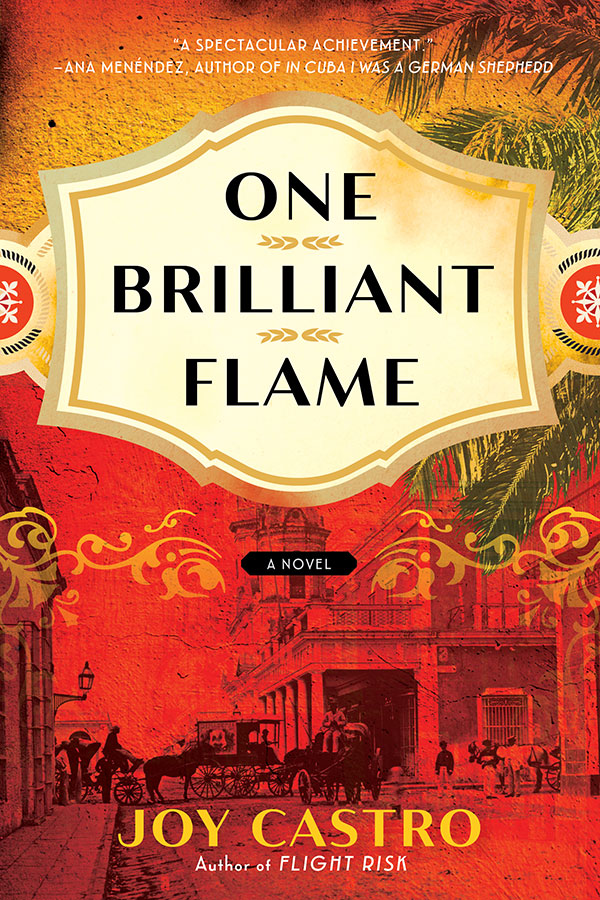 A nineteenth-century utopia becomes a powder keg of political intrigue and betrayal in an enthralling historical novel―inspired by actual events.

Key West, 1886. The booming cigar industry makes it the most prosperous city in Florida. As a rebel base for the anticolonial insurgency in Cuba, it’s also a tinderbox for six young friends with ambitious dreams.

They all brim with secrets: Zenaida, the daughter of an assassinated Havana journalist; power-hungry Sofia, who plots a fast track to success; Chaveta, Zenaida’s loyal comrade in arms who fearlessly flouts tradition; Feliciano, a charismatic Galician anarchist; Líbano, the cafetero, silent and watchful; and Maceo, a daring guerrilla soldier who fights a brutal undertow. As lives intertwine, revolution smolders, and passions ignite, the bustling coral island is set to explode.

Against the backdrop of the Great Fire of Key West, One Brilliant Flame explores the luminous fates of consuming passion and encroaching peril in the face of insurrection, sacrifice, and inextinguishable hope.

“Suspenseful and steeped in history, Joy Castro’s One Brilliant Flame transports readers to a vibrant nineteenth-century Key West, one stoked by revolution in Cuba and inflamed by the passions of striking young characters. Castro’s novel beautifully illuminates a largely forgotten history in a memorable and compelling light. I learned so much, but more importantly, I couldn’t put it down.” ―Chantel Acevedo, author of The Distant Marvels

“A stunning work of the imagination―a brilliant evocation of the way war, exile, and freedom defined the Cuban nation from the start and how the wounds of the early republic haunt us still. In animating a lost world, Joy Castro beautifully traces the future that might have risen from its ashes. A spectacular achievement that continues to resonate beyond the book’s close.” ―Ana Menéndez, author of In Cuba I Was a German Shepherd

“Through spare, direct language and a remarkable cast of characters, One Brilliant Flame manages organically and seamlessly to examine poverty and privilege, politics and spirituality, poetry and revolution. Set in late nineteenth-century Key West, a beehive of radical activity bolstering the insurgence in the Cuban War of Independence, Joy Castro’s page-turner deftly explores the social struggles that the rebellion has spawned among these indelible Floridian expats: class uprising, the liberation of women, equality for people of African descent, the freedom to love whom one chooses. One Brilliant Flame is as delicious in its perpetual surprises as it is vital in reviving an extraordinarily rich episode in American history. ―Kia Corthron, author of Moon and the Mars and Windham-Campbell Prize recipient

“An absorbing and fascinating look at a forgotten part of Key West (and US) history. Joy Castro’s One Brilliant Flame introduces us to three young women whose ties to each other and to the Cuban fight for independence are as complicated as their personalities. One Brilliant Flame proves that the political is also the personal.” ―Ana Veciana-Suarez, author of The Chin Kiss King

“As the old Spanish Empire falls and the new North American one rises, a tiny island in Florida becomes the key to understanding a world without empires. This historical novel is conjured by the ghosts of lectors in tobacco factories, visionary preachers of anarchy and love who understood that partial freedom is no freedom at all. With her signature elegance, Joy Castro’s One Brilliant Flame illuminates a forgotten and fundamental chapter of US history, while it also indulges in the revolutionary fervor of burning it all.” ―Luis Othoniel Rosa, author of Beginnings for an Anarchist Aesthetics: Borges with Macedonio

“Stunning historical fiction that puts women front and center―at last!―in the late-nineteenth-century world of Cubans seeking freedom for their island from the other side of the sea. Beautiful and illuminating!” ―Ruth Behar, Distinguished University Professor of Anthropology, University of Michigan, and author of Letters from Cuba

“An incisive examination of politics, power, desire, gender, sexuality, class, race, and the ruinous legacy of colonialism, One Brilliant Flame reintegrates women into the heart and history of the Cuban revolution. Joy Castro’s evocative language lures us to the sands of Key West to walk beside her revolutionary exiles, the sun searing our skin and their words echoing in our hearts. I was unable to pry myself from this novel’s grip.” ―Jennifer Steil, author of Exile Music

“Set in 1886 against the backdrop of Spain’s colonial rule of Cuba, Joy Castro’s One Brilliant Flame takes us on a journey through Florida’s Key West at a moment when Cuban immigrants filled the streets, cigar factories, and cafés. Her young rebels―whether fueled by guilt, betrayal, love, loss, or hope―come alive with charged eroticism both for revolution and for each other. The entwined lives of Zenaida, Sofia, Chaveta, Feliciano, Maceo, and Líbano are fiercely affected by passion as they struggle to be true to their causes, their families, and each other.” ―Emma Pérez, author of Forgetting the Alamo, Or, Blood Memory and The Decolonial Imaginary