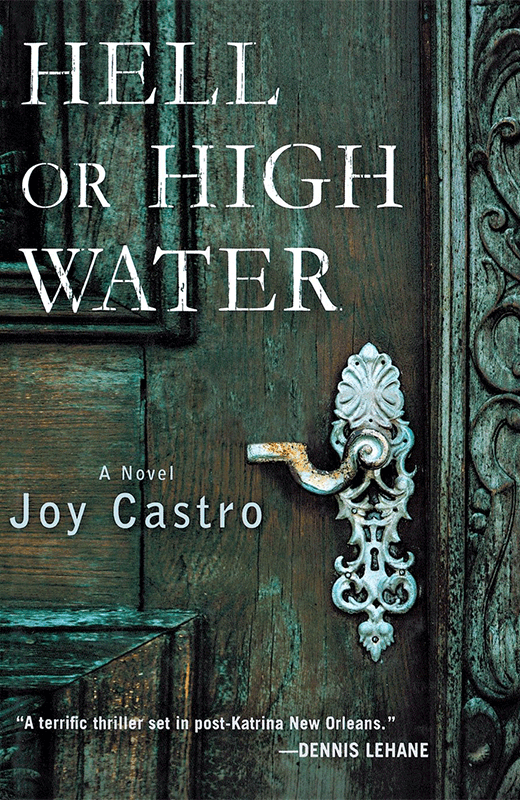 It’s 2008 in New Orleans, and hundreds of registered sex offenders who went off the grid during the Katrina evacuation have never been found. The sex-offender story is assigned to Nola Céspedes, an ambitious young reporter at the Times-Picayune. As her research progresses, Nola is gradually drawn in to an underworld of violent predators—a world she struggles to keep separate from her middle-class professional life. Raised in poverty by a single mother in New Orleans’ notorious Desire Projects, Nola has her own secrets to hide.

Winner of the Nebraska Book Award, the thriller Hell or High Water (St. Martin’s, 2012) was named a Best Book of 2012 by Kirkus Reviews and one of the Kansas City Star’s Top 100 Books of 2012. Chosen as a Summer 2012 Okra Pick by the Southern Independent Booksellers Alliance, a Summer Beach Read by WorkingMother.com, and a book of the month by Las Comadres and Friends National Latino Book Club, Hell or High Water has appeared in France and Germany and been optioned for film or television.

“Castro’s first mystery is fierce and intense, with both harrowing depictions of New Orleans after Katrina and psychological mayhem for its troubled heroine, who crawls under your skin and lingers there long after you’ve finished reading.” —Kirkus Reviews

“Nola pursues the story… with a soulful affection for her battered yet still beautiful city.” —New York Times Book Review

“Hell or High Water is an edge-of-the-seat thriller, a page turner with so many twists and hidden clues and sudden light beaming down that I have already reread the whole thing, eager to find the early indicators of the great surprises launched by Castro at all the key points of the book. History book, sociological study, criminal analysis, love story, thriller, and immigrant epic: Hell or High Water has it all, and Castro does it all so well.” —HuffPost Books

“The laborious acts of physical rebuilding and personal recovery become scintillating themes in Joy Castro’s compelling mystery fiction debut… just the beginning of what should be a long-running series.” —Miami Herald

“Memoirist Joy Castro has written a terrific debut novel that blends crime investigation with personal catharsis in post-Katrina New Orleans…. I really enjoyed Nola’s fresh voice, her point of view on the ‘real’ New Orleans, and her musings on the lingering effects of the violation of a person or of a city.” —Addicted to Story

“A new summer thriller is out and this one may scare you into sleeping with the lights on…. [O]nce you start Hell or High Water, it will be hard to put down. It’s a rock and roll ride from start to finish!” —Chick Lit Central

“Joy Castro’s fiction debut is a captivating story that parallels the rape of a woman to that of New Orleans itself: the destruction, the despair, the death. And the imagery of water, with the conflicting powers to maintain life as well as to annihilate it, weaves its way throughout the tale.” —Jen’s Book Thoughts